Honourable Najib Balala, EGH, was born in 1967 and is trained in International Urban Management at the University of Toronto, Canada. He underwent the Executive Program for Leaders in Development at the John F. Kennedy School of Government at Harvard University.

CS Balala was re-appointed as Cabinet Secretary for Tourism and Wildlife by H.E. Uhuru Muigai Kenyatta, CGH, President of the Republic of Kenya. PS Zeinab A. Hussein, has over 20 years work experience both in private and public sectors. Prior to joining the  public service, she held various senior and leadership roles in McKinsey & Co, Africa, working  with the Johannesburg, Lagos and East Africa offices. Her work at McKinsey as an associate  consultant saw her transform and reform various corporations in a wide range of sectors including National Oil companies,  Large Commercial Banks and she oversaw successful mergers in the telecommunications sector in West Africa.

Prior to joining McKinsey, PS Hussein held various senior roles at Shell Africa including, Internal Auditor for the Shell Africa Group, Aviation Manager for both Shell Aviation East and West Africa and she also sat on the management teams of Kenya Shell, Shell Ghana and Shell Aviation and BP Aviation. 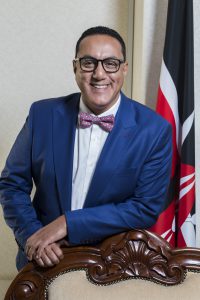 Honourable Najib Balala, EGH, was born in 1967 and is trained in International Urban Management at the University of Toronto, Canada. He underwent the Executive Program for Leaders in Development at the John F. Kennedy School of Government at Harvard University.

CS Balala was early this year re-appointed as Cabinet Secretary for Tourism & Wildlife by H.E. Uhuru Muigai Kenyatta, CGH, President of the Republic of Kenya. He had been appointed as Cabinet Secretary for Tourism in the 2015 Government reshuffle.  He moved from the Ministry of Mining, where he was appointed as Kenya’s first Minister in May 2013 and is credited with delivering the Draft Mining Bill in 2014, the first policy and institutional framework review of Kenya’s mining sector since 1940.

Hon. Balala served simultaneously as Member of Parliament for Mvita Constituency, Mombasa, and as Kenya’s Minister for Tourism from April 2008 to March 2012, where he delivered the Tourism Bill and gave the sector a policy and legal framework geared towards maintaining sustainability. Then, he was elected Chairman of the United Nations World Tourism Organization in 2011 and was voted Best Tourism Minister in Africa in 2009 by Africa Investor (AI).

He is credited with steering Kenya’s tourism sector to recovery following the post-election violence in 2008. He played a significant role in boosting growth and stability in the Kenyan and regional tourism sector, working closely with private and institutional investors, with conservation and regional development agencies to ensure that the economic potential of this vital sector was both prudently and sustainably managed.

Zeinab A. Hussein (Mrs.), CBS, born in 1973, is the Principal Secretary, State Department for Tourism, Ministry of Tourism and Wildlife. Prior to her appointment in December 2021, she served in the same capacity at the State Department for Correctional Services, Ministry of Interior and Co-ordination of National Government since July 2018.
She has previously served as the Principal Secretary at the State Department for Post-Training and Skills Development in the Ministry of Education, State Department for Irrigation in the Ministry of Water and Irrigation and the State Department for Gender Affairs in the Ministry of Public Service, Youth and Gender Affairs. Prior to Public Service, Zeinab worked at East Africa & Africa Delivery Hub, McKinsey & Company, where she worked as Head of Professional Development & Human Resources. Earlier, Zeinab had served at Accelerate Africa, a management consulting firm that focuses exclusively oserving the growth, expansion and management needs of Africa’s Companies while placing focus on Africa’s SMEs, Family owned businesses and Africa’s Medium to Large organizations, a company she cofounded. She also worked as Head of Recruitment and Administration as well as a Consultant at McKinsey & Company and as a Regional Sales and Marketing manager – West Africa, for Shell Company. Her key capabilities are in Organizational Transformation, Systems and Process Alignments, Big Data Management, Recruitment and Governance.Zeinab is a graduate of the Harvard University Kennedy School of Government (MPA, Business and Economics) and the University of Nairobi (MBA – Business, International Business
Management).